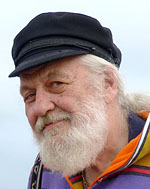 I am very happy that I had the chance today to attend a lecture held by Jack Edmonds, who is regarded as one of the most important contributors to the field of combinatorial optimization.

During his talk, Jack asked us to think about how to reduce the shortest path problem on directed graphs with rational costs on the edges to the assignment problem. I thought a bit about it and want to present my solution here.

First of all, let's recap what the shortest path problem and the assignment problem is.

Given a directed graph

the task is to find a path

such that the cost function

In fact we assume that the graph does not contain negative circuits. Otherwise the problem would be equivalent to the longest path problem with cost function

of equal size and a cost function

such that the cost function

And here comes the reduction

First, we will construct a bipartite graph

constructed by the following algorithm.

is a matching, the constructed path

cannot have a circuit, i.e. a

does not repeat. The algorithm stops as soon as it reaches

and because the set of nodes is finite, the algorithm has to stop. It follows that

is a perfect matching in

First of all recognize that

have got the same size. Because a node

either has an successor in

or is not in

does not contain a circuit, two edges in

cannot be adjacent and thus every node in

gets covered. It follows that

is a perfect matching.

Taking proposition 1 and 2 together, we can reduce the shortest path problem to the assignment problem by doing the following:

has got minimal cost, so

has. Recap that we required the absence of negative circuits.